skip to main | skip to sidebar

The Fools Are Out There 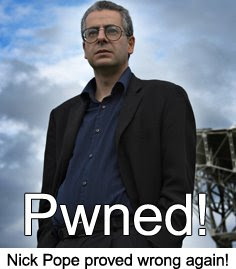 Ah. The sweet smell of confirmation as a Daily Mail reporter notes regarding the Conisholme UFO debacle:

"An interim report from the firm, Enercon, has concluded bolts securing the blade to the hub of the turbine failed due to 'material fatigue'."

Which is what I said the moment this story broke to national news on this very blog entry!

Where is Nick Pope (a leading authority on UFOs and the unexplained*) now, I wonder? Hiding under a rock I hope.

I did write to one of the popular locals and a nice young lady there sighed, that yes, the UFO story was rather unlikely but it sells newspapers.

Is it a bird, is it a plane? No! It's a fucking newspaper editor trying to make a quick buck.

*According to his website.
Posted by Marc Draco at 15:16

Marc Draco
Tub-thumping atheist, skeptic, Liberal. Foul-mouthed pragmatist.
And I really know where my towel is.